You are here: Home / Sports / Hawkeyes focus on pass protection 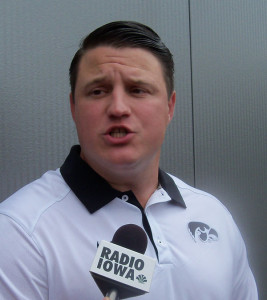 Five players with starting experience return from a line that helped the Hawkeyes roll to a 12-0 regular season. But Ferentz says there is plenty of room for improvement and it starts with giving their quarterback more time to throw.

Beathard finished with 17 touchdowns and more than 28 hundred yards of passing but was sacked a total of 10 times in Iowa’s final two games.

“The number one priority right now outside of developing our roster and our depth is improving our pass protection”, said Ferentz. “In 2013 we gave up 15 sacks and to double that in two years I think is alarming.”

Ferentz says the Hawkeyes became too predictable from a protection standpoint late in the season, especially on third down.

“In the Michigan State game our number one problem was edge rushes and that is not an indictment of the tackles because they were blocking NFL players. We need to do a better job of giving them help with formations and chipping and some of those things. I would not put that on them because that was bad coaching in my opinion, starting with myself.”

The Hawkeyes close out spring drills with a open practice on April 23.