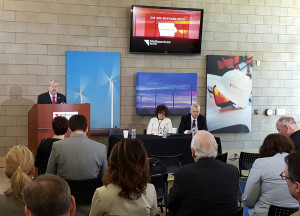 The project, dubbed Wind XI, would increase Iowa’s wind energy generation by up to 2,000 megawatts.

Governor Terry Branstad discussed the details at a news conference under a wind turbine MidAmerican has on the Iowa State Fairgrounds. He said it’ll be the largest economic development project in the state’s history.

The plan being submitted to the Iowa Utilities Board (IUB) calls for an investment of $3.6 billion. Iowa already leads the nation in generating 31-percent of its energy from wind. “Once the project is complete, the state will be on track as the very first state in the nation to generate more than 40-percent of our energy from wind power,” Branstad said. 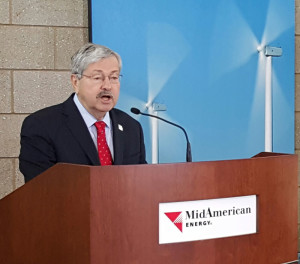 “Wind XI is the largest wind project MidAmerican Energy has ever undertaken and it’s a very giant step forward toward a clean energy future for our state,” Fehrman said. MidAmerican will not be asking for an increase in customer rates or financial assistance from the state to pay for the project.

Fehrman noted the company erected its first wind turbine in Iowa roughly 12 years ago. “We’ve invested $6.6 billion in building wind projects. That figure is going to grow to more than $10 billion with the completion of the Wind XI project — all with minimal impact to our customers and their costs,” Fehrman said. “We now have wind farms in operation or under construction in 23 counties across Iowa and we’ve partnered with dozens of communities and more than 2,400 landowners to build these wind farms. Those numbers will just grow with this announcement.”

In addition to the wind energy, Governor Branstad said the project is expected to generate $12.5 million per year in property tax payments and $18 million a year in landowner payments. “Every wind turbine that you see, as you travel across Iowa, means income to the farmer whose land it’s on, revenue to the local governments in the county that it’s located, and jobs for families that work to produce the towers, the turbines, and the blades,” Branstad said.

State economic development officials report that wind power supports up to 7,000 jobs in Iowa. MidAmerican Energy has asked the IUB to approve the plan by September, so the company can take advantage of a federal production tax credit program for wind projects. Governor Branstad claims Iowa’s leadership in wind energy has helped attract over $12 billion in other business investments in the state.