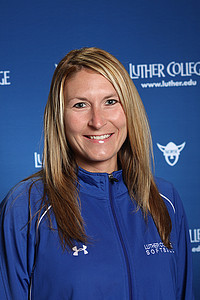 The Luther College softball team has put up some staggering numbers on defense in rising to number two in the latest division three coaches poll.

The Norse (27-1) have given up only 22 runs in 28 games. The pitching staff already has 14 shutouts, including six in a row, and only three oponents have scored more than one run.

“Annie Versnik is leading the nation in ERA and has yet to give up an earned run”, said Luther coach Renae Hartl. “Amanda Witzlib was the 2015 Iowa Conference pitcher of the year and then freshman Samantha Bratland from Spring Grove, Minnesota is getting some quality innings.”

When opponents are able to put the ball in play the Norse are getting the job done defensively. They have committed only 20 errors and Hartl says senior All-American catcher Carli Radil has been a big part of the success of the pitching staff.

“Those three pitchers really trust her and she does call her own game which is not common at the college level. They trust her to call that good mix for them.”

Luther returns to action on Saturday with a doubleheader at Buena Vista.