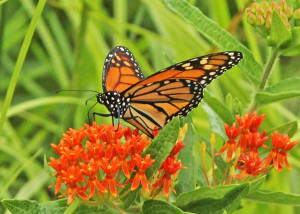 The population of monarch butterflies that overwintered in Mexico is said to be more than three times larger than what was seen last year.

It’s exceptional news for conservationists in Iowa and elsewhere who are trying to restore the monarch population which has dropped 80 percent in the past 20 years.

Sue Blodgett, who chairs the Department of Entomology at Iowa State University, gives some of the credit to Iowans who are planting milkweeds by the thousands.

“I think that’s probably helping,” Blodgett says. “Of course, there’s other factors, too, the lack of any drought where the monarch have to migrate through, there’s several factors that contribute, but certainly, the efforts we are making here in Iowa are part of that picture.” The orange-and-black insects are a key factor in providing pollination services to agriculture that are estimated to be worth $3 billion s a year.

“It’s iconic and it also is a really good indicator of habitat,” Blodgett says, “and not just habitat for the monarch but habitat for other pollinators, birds and other wildlife that we value.” The World Wildlife Fund reports that this winter’s survey found adult butterflies covered about ten acres of forest in Mexico. During the last three winters, overwintering butterflies occupied three or fewer acres.

Blodgett says the goal is to see a sustained monarch population of about 15 acres, or 225 million butterflies through domestic and international efforts.

“In the past, there’s been some big storms or frosts or freezes that have gone through Mexico that have devastated the population,” Blodgett says. “Because of that migration, there’s a lot of weather factors involved that can influence that population.”

One way Iowans can help in their back yards or on larger pieces of property is by planting milkweed, which monarch caterpillars love. “Right now, we have nine different species of milkweeds planted at all of our Iowa State University research and demonstration farms around the state,” Blodgett says, “to show people what they look like and to also see how they persist, how they grow and to look at how the larvae develop on those.”

The Iowa Monarch Conservation Consortium was established last year to enhance monarch reproduction and survival in Iowa through collaborative and coordinated efforts of farmers, private citizens and their organizations. Learn more at: monarch.ent.iastate.edu.