You are here: Home / News / Nebraskan in #NeverTrump movement to speak in Iowa April 29 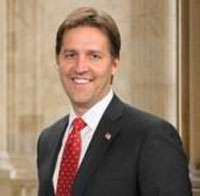 A neighboring state’s senator who has become a key figure in the “Never Trump” movement will speak to a group of Iowa Republicans later this month.

Forty-four-year-old Ben Sasse is from Fremont, Nebraska. He’s been a U.S. Senator since January of last year.

This year, Sasse has become an outspoken critic of Donald Trump. Today, Sasse tweeted that he and his wife cast early votes for Ted Cruz in the Nebraska Primary.

Sasse has said if Trump becomes the Republican nominee, he’ll look for a “conservative option” — in other words, he’ll vote for a third party candidate rather than vote for Trump in the General Election.

On April 29, Sasse will be in West Des Moines, the main draw for a Polk County Republican Party fundraiser.