You are here: Home / News / No funding prescription yet for ailing state buildings 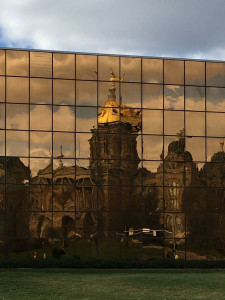 The state capitol reflected in the Wallace building windows.

Major fix-up jobs for some key state buildings are likely to be delayed for another year.

Senator Matt McCoy, a Democrat from Des Moines, has been pushing a plan to borrow money to renovate the State Historical Building and the Wallace State Office Building — and remove black mold from a building on the Law Enforcement Academy campus.

“These buildings are all failing,” McCoy says. “They’re failing and so we’ve got to fix them.”

McCoy on Monday inserted a plan in a budget bill that would spend one dollar on each of the three buildings. It’s a procedural move to keep the conversation about his borrowing plan alive.

“And of course spread that over several years, but either way we don’t have that kind of money right now,” Huseman says. “Same with the Wallace Building. That’ll take $50-60 million.”

But Huseman says legislators want to ensure staff at the Law Enforcement Academy can continue to work out of rented space if the black mold problem in one of the academy’s buildings is a health risk. These spending decisions are included in a budget bill that has not yet come up with debate in either the House or the Senate.