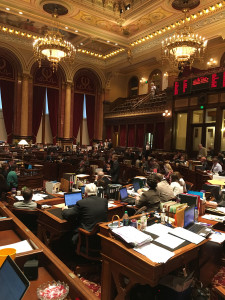 Republican Governor Terry Branstad is calling on the 50-member Iowa Senate to debate a water quality plan this year.

“We think the senate should at least debate that bill,” Branstad says. “And if they want to amend it or offer alternatives, that’s fine.”

In January, Branstad offered what he describes as a “framework” for finding a new way to finance water quality and soil conservation efforts. And Branstad has expressed support for the alternative plan House Republicans have offered.

“We think it would be a mistake for the Senate to go home without debating that issue,” Branstad says. “…There’s time to do that.”

Lawmakers hope to conclude the 2016 legislative session soon. Today is the final day legislators receive a daily stipend to cover the expense of travel and accommodations in Des Moines.