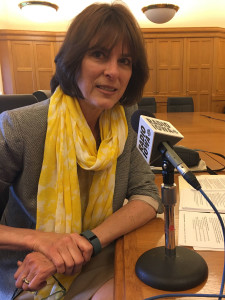 A national group is featuring a Mason City woman’s story in its push for prison sentencing reform.

“It’s the worst nightmare anybody could ever imagine,” William Martinson says as the documentary video begins.

He’s the father of Mandy Martinson. “Families Against Mandatory Minimums” founder Julie Stewart will unveil the video tonight during an appearance at Drake University.

“Mandy’s case is very typical of so many cases that we see every year in our office,” Stewart told Radio Iowa, “and it’s often someone who’s an addict, someone who’s not hurt anyone — largely they’ve hurt themselves — and someone who got too much time in prison.”

Mandy Martinson of Mason City got addicted to meth in 2004, started dating a drug dealer and was arrested a month after the boyfriend moved into her home. She was sentenced to 15 years in prison for the quantity of meth in the house and the gun authorities found inside. Martinson completed a treatment program, got sober and had started working again before she was sentenced, but the judge had to impose the mandatory sentence of 15 years.

“Her former boss got it completely when he said you think about these policies in the abstract and they seem great and then you meet someone who’s been affected and you’re like, ‘Wow, this is not what I thought it was,'” Stewart said Monday afternoon.

Mandy worked as a dental hygienist for Dr. Blake Barnes and Barnes is featured in the video.

“When you hear of these rules, you say: ‘Oh, mandatory. That’s sounds great. Let’s be hard on drugs,'” Barnes said during an interview included in the video. “Until you put a person you know behind that, you don’t get the unfairness of that.”

Stewart, the founder of Families Against Mandatory Minimums, has been fighting for federal sentencing reform for 25 years.

“If we were representing innocent people, we’d have an easier lift. We’re not. Everybody that is involved with FAMM is guilty and I am the first one to say they need to be punished,” Stewart said. “Prison’s even the appropriate punishment, but not for the length of time when they are low-level, non-violent offenders.”

In 1991, Stewart started lobbying to give judges more discretion and end mandatory sentences.

“When my brother was arrested and sentenced to five years in federal prison for growing marijuana, I thought that members of congress did not know who they were putting in prison and that they simply needed to see the faces, meet the families of the people they were incarcerating and they would go: ‘Oh my God! We didn’t mean to do that,'” Stewart told Radio Iowa, “and they would repeal mandatory minimums.”

Since then, Stewart said there’s been some progress at the federal and state level, but she’s seeking broader sentencing reform. And that’s why Mandy Martinson’s story is being featured in this mini-doc.

“It does work to put a human face on a policy and help members of congress to understand it,” Stewart said, “because it’s very easy to sit in the hallowed halls of congress and shout out: ‘Four years! Five years! Six years! Ten years!” for some quantity of drugs and feel good about it — and have actually no idea how it’s going to impact real people.”

Mandy Martinson is scheduled to be released from prison in October of next year after serving the entire 15 year sentence. There is no early release in the federal system.

Stewart’s group is lobbying Senator Chuck Grassley to pass a sentencing reform bill through Grassley’s Senate Judiciary Committee, but Stewart said the bill currently under consideration doesn’t go far enough and wouldn’t have helped reduce Mandy Martinson’s sentence if it had been law.

“So there is this sort of ‘Mandy Martinson test’ that the bill doesn’t pass,” Stewart said.

Stewart also cited election year politics as a factor. She doesn’t expect the bill to pass the senate before November 8.

Stewart will deliver the spring lecture at the Harkin Institute for Public Policy tonight at Drake University. She will publicly unveil the video documentary about Martinson shortly after the event begins at 7 p.m.