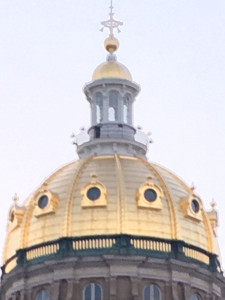 The golden dome of the capitol is in need of repair.

Water leaks are damaging the golden dome of the historic Iowa State Capitol and legislators are planning a 10 million dollar restoration.

The thin, 23-carat-gold skin on the dome was replaced in 2005, but officials suspect a lightning strike and strong winds have cracked the mortar — so moisture is seeping inside.

“They are going to have to put scaffolding all around the dome and essentially fix and repair from the very top, the cupola, on down,” says Senator Matt McCoy, a Democrat from Des Moines who has been in on the planning. “It’s quite an extensive project and could take up to a year and a half.”

Legislators are setting aside the money in a budget bill to make the dome repairs. Officials say restoration work wouldn’t start until this fall. That way the scaffolding won’t obscure the golden dome during the National Governors Association summer meeting in Des Moines.

The dome is made of steel and stone, but covered on the outside by a layer of gold that’s thinner than aluminum foil. The tip of the dome is 275 feet above the building’s ground floor.