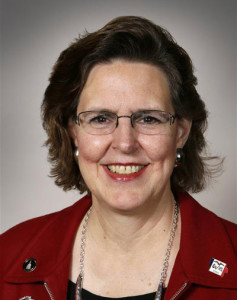 Late Tuesday, Republicans in the Iowa House proceeded with their plan to completely cut off state funding of Planned Parenthood services. Currently, no tax dollars are being spent on abortions, but the state and federal government cover the costs when Medicaid patients get contraceptives and exams at Planned Parenthood.

Representative Sandy Salmon, a Republican from Janesville, said the state shouldn’t do business with Planned Parenthood.

“Abortionists are not needed and certainly do not need taxpayer funding,” Salmon said during remarks on the House floor. “…Their culture of death weakens us spiritually, morally and in our respect for human life and the rights of others.”

All 57 Republicans in the House united and voted down a proposal Democrats offered in support of Planned Parenthood. Representative Beth Wessel-Kroeschell, a Democrat from Ames, said continued state spending at Planned Parenthood for family planning services is a “wise investment.”

“A University of Iowa study found that for every $1 spent on birth control, the state saves $15 on unintended pregnancies,” Wessel-Kroeschell said. “…Planned Parenthood understands low-income and young women and people have positive feelings and outcomes after using their services.”

The debate on this subject happened during House consideration of a massive budget bill that outlines spending for the Departments of Public Health and Human Services. Debate was suspended moments before midnight, as House rules prohibit voting after the clock strikes 12.