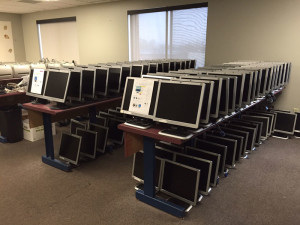 AIB computer monitors that will be sold.

If you think your spring cleaning is going to be a chore, imagine cleaning up 95 years of accumulated stuff.

That’s what’s happening as the AIB College of Business in Des Moines prepares to close on June 30th when it will then be taken over by the University of Iowa.

AIB spokesperson Jane Meisner says they’ve been going through things to determine what won’t be needed.

“We’ve worked with the University of Iowa to walk around and inventory all of the equipment and the furnishings and they have indicated what they probably won’t have a need for and we are trying to find a home for some really good office equipment and other items,” Meisner says. She says they are planning what they call a garage sale of items on Thursday. 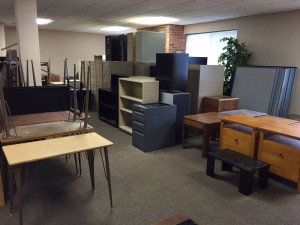 “We have 125 17-inch computer monitors that are near new. They were used in classrooms and offices and they will be sold I believe its for five dollars a piece,” Meisner says. “We have computers, we have desks, bookcases, filing cabinets, and lots of memorabilia that would be of interest to alumni or local people.”

Meisner says they are pleased that they have been able to give many tables, desks and beds from the student dorms to nonprofit agencies who will put them to a good use. “We made some of them available to students and staff to purchase, but we gave many, many beds to the Free Store and to Bridges of Iowa. And we’ve given other furniture and office equipment to a long list of other area nonprofit,” Meisner says.

They’ve also had the chance to find home for some special items — such as the eagle statue of the school’s mascot. “We are aware that Faith Baptist College in Ankeny are also the eagles, so our athletic director gave them a call and asked them if they would like to have that,” Meisner says. “It’s four-feet tall statue with a wingspan of another four feet, and they did graciously accept that. So we are glad that the eagle has a good home.”

Used cheer uniforms went to a local dance studio, while used baseball pants and belts were sent to a high school in Wisconsin. Meisner says it’s fun to see organizations that could really use the items. It is also a little bittersweet as the items leave campus.

She says they have mixed emotions as they are anxious to see how the University of Iowa will use the campus. “But, you know, it’s hard saying goodbye to friends and you get a little bit nostalgic about the long history of AIB,” according to Meisner.