You are here: Home / Human Interest / Time to pick the state’s top tenderloin 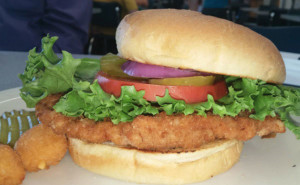 Iowans will be able to nominate their favorite pork tenderloin restaurants starting this morning in a widely-contested statewide competition.

Kelsey Sutter, spokeswoman for the Iowa Pork Producers Association, says the online form is simple to fill out at the organization’s website, pork.org.

“Nominations are open for a little over a month,” Sutter says. “We expanded it by a couple of weeks this year. Pork producers from across the state will spend the summer judging the 40 with the most nominations across the state. Then, a panel of chef-judges will go around in September and judge the top five.”

Sutter says the winning restaurant will be announced in October to kick off National Pork Month. “The winner receives a $500 cash prize from the Iowa Pork Producers, countless amounts of free promotion throughout the state,” Sutter says. “There is a tremendous following of this contest. Their business really blows up when the announcement comes out in October. Of course, signage to brag all year long in their restaurant.”

Last year’s winner was the Belmond Drive-In in Belmond. That 2015 contest produced almost 1,200 nominations. The deadline to offer new nominations is June 8th.