You are here: Home / News / Top bull riders to compete in Iowa this weekend 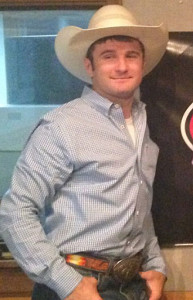 Among those top-rated riders, Cody Ford grew up in Kansas and says it’s a thrill to watch but an even bigger rush to be atop one of those bucking 2,000 pound animals.

“I tell people all the time, I ride bulls because I can,” Ford says. “I’ve always been very talented at bull riding and it’s something I love to do. We always had a joke that you could drop me off in the middle of New York City and I could make a living. I could do whatever but I like riding bulls.” Ford says he’s known since an early age that this was the career for him.

“First time I remember wanting to be a bull rider, all I can remember is I was ten,” Ford says. “It didn’t necessarily run in the family but I grew up in a rodeo atmosphere. Cowboy was a lifestyle. We ranched every day and it was just who I was and I decided at a young age and I didn’t want to work for a living and I wanted to go all over the world and be a professional bull rider.”

Scott Grover is the PBR announcer and offers some insight as to what those attending can expect. “I’m more like a sports broadcaster,” Grover says. “I’m going to analyze a little about what happens. We’ll get excited and ask the crowd to be a part of it. I want to introduce what’s going to happen and then I want to stay out of it and let the action do its job and the crowd will come along with us as we go.”

The series runs Saturday and Sunday at Wells Fargo Arena in Des Moines.