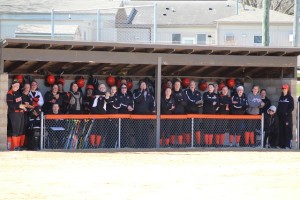 It was the biggest upset in Wartburg softball history. The Knights opened an Iowa Conference doubleheader against arch-rival Luther by stunning the second ranked Norse 12-4. It was Wartburg’s first victory over a top five team.

First-year coach Jamie Mueller, who has only two upperclassmen on her 31-player roster, says the victory can be a confidence builder for the Knights.

“We have a young group on the field and we don’t have a ton of experience so confidence is a big deal for us”, said Mueller. “Seeing that they can beat the number two team in the country will give them a lot of confidence and they will realize how much potential they really have.”

The victory snapped Wartburg’s 12-game losing streak in the series and also ended Luther’s school-record 27-game winning streak. Prior to Tuesday, the Norse (30-2 overall, 7-1 IIAC) had surrendered one run or less in their last 11 games.

The victory was Wartburg’s first over the Norse since April 25, 2009. It also marked the biggest upset in program history, topping a 9-0 win over sixth ranked Central on April 17, 2007.

“It is also big for us because we are in a fight to get into the conference tournament so a win over that program is big for us.”

Luther bounced back to win the nightcap, 14-2.