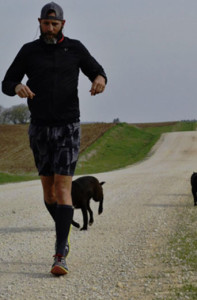 Ryan Wade is now on the third day of his week-long run.

Sean Biermann, part of Wade’s support team, says the goal is to bring in $175,000 for the Leukemia and Lymphoma Society. “He’s challenged himself to run from Eitzen, Minnesota, all the way south to Farmington, Iowa,” Biermann says. “It’s a journey of 250 miles over seven days. The broader message is getting awareness out about leukemia and lymphoma and blood cancers as well as trying to raise money for the great work they do as far as research and helping out families and patients.”

Wade is calling his trek, “One Step at a Time,” and he got involved after a friend lost a child to leukemia. He’s hoping Iowans will join him on the run, even if for a few miles — or blocks. “Come walk, come run, if you want to bring a bike, go ahead,” Wade says. “Meeting people, talking to people, sharing stories. If you have a story, I want to hear it. Come out and tell me it. Motivation, that’s what I want.”

Biermann says folks along the route can donate online or in person. “We’re going to have a bucket out on our caravan that’s following Ryan,” he says. “If you want to stop by and throw some quarters in or a couple of dollar bills, every little bit helps. Anything we can raise is better than nothing, especially in the fight against cancer.”

Towns along the route include: Luana, Edgewood, Coggon, Solon, Riverside and Mount Pleasant. Learn more or donate at the website: OneStepLLS.org.