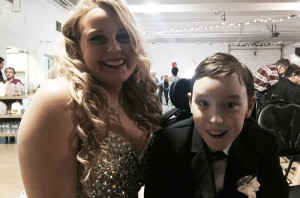 A chance encounter in a Florida airport and a random act of kindness by a central Iowa teen has turned into a world-wide social media phenomenon.

Carroll resident and Kuemper Catholic High School senior Brittany Klocke had her flight from Orlando to Minneapolis canceled in February.

Klocke was stranded there for nearly 15 hours. The 19-year-old spotted 14-year-old Andrew Shumway in the terminal and his contagious smile drew her in for a conversation. She felt an immediate bond with Shumway, who has cerebral palsy, because one of her siblings has a disability.

“He looked like a really special person,” Klocke says. “Just kind-hearted because a lot of people with disabilities can make anyone’s day and they’re beautiful, kind souls.” The time spent talking at the airport led to an invitation from Shumway, who asked Klocke to join him for a community-wide, special-needs prom being held in his hometown on April 16th. Brittany says she didn’t hesitate for a minute, even though her senior prom in Carroll was scheduled for the same night. 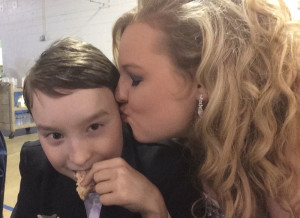 Brittany made the nearly 5-hour trip to Tomah, Wisconsin, last Saturday to accompany Andrew as his date.

“When he first saw me, his eyes rolled in the back of his head,” she says. “He said, ‘Oh my gosh, you’re so gorgeous!’ He had just the sweetest smile on his face and he picked out a white rose corsage all by himself and he gave it to me and I gave him his boutineer. He said, ‘We’re going to go out for ice cream tonight,’ and I said, ‘Of course,’ and he was just so excited.”

Klocke says there were a lot of tears from both of them that night, happy tears from being overwhelmed by the kindness and joy that had come from a chance meeting. She says Shumway is excited about what has happened and is hoping this may lead to a meeting with Ellen DeGeneres on her talk show. Klocke, on the other hand, says she doesn’t want the attention. She says this is all about Andrew and hoping others learn how easy it can be to bring joy to others.

“It’s not about me. It’s about Andrew and his family and anyone that is affected by a disability,” Klocke says. “I believe everyone has a kind heart and we should all think of other people and not ourselves. If you have something like this, even if it’s just a moment out of your day to complement somebody or to make someone smile, take on that chance and pursue someone’s happiness.” Klocke will graduate from Kuemper in May. She dreams of becoming a registered nurse and looks forward to a summer visit with Shumway, possibly a trip to Disney World, and enjoying her new life-long friend.