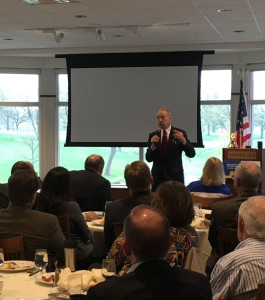 Senator Chuck Grassley says the worst development during his 40-year career in congress has been “more partisanship,” but Grassley says that’s also one of the best things — because it is better defining “who’s a Republican and who’s a Democrat.”

The presence of “moderate” Republicans and Democrats in congress “blurred” things for voters, according to Grassley.

“And that makes it more fuzzy for the people at the grassroots,” Grassley says.

But Grassley says the higher level of partisanship in congress makes it “harder” to govern.

Grassley answered questions from members of a Des Moines Rotary Club for about half an hour this morning. He was asked about the FBI’s investigation of Hillary Clinton’s use of email while she was secretary of state. Grassley suggested if there is “enough evidence to prosecute” Clinton, but it doesn’t happen because of “political interference, then he assumes someone in the F-B-I “is going to leak” reports on Clinton.

“There’s a lot of people in the FBI that are really proud of being FBI people. You wouldn’t call them whistleblowers because they’re not going to classify themselves as whistleblowers — it’s going to be very anonymous — but it’s difficult to keep information quiet.” Grassley told reporters after his Rotary appearance. “You’ve heard me say that if two people know something in Washington, it’s no secret.”

But Grassley said he’s not personally calling on F-B-I agents to release information about Clinton’s emails if she is not indicted.

Grassley told he’s heard rumors FBI agents are upset former General David Petraeus didn’t get a tougher penalty for sharing classified information with his biographer, who he was also having an affair with.