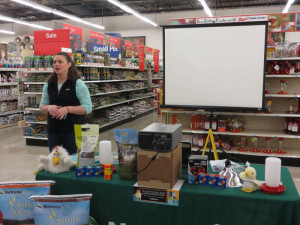 As more people look to have control over how their food is grown, many are planting gardens for the first time. Some are even turning their backyards into chicken coops.

“How much space do I need, how much feed will I go through, do I need a rooster to get eggs? Some of those basic questions, clear up to what temperature do I need to set the brooder at, so it can get pretty technical,” according toe Holmes. Paul Keller and his family raise organic vegetables near Janesville. He says they spent a good deal of time doing research before deciding to add poultry to the mix.

“We did a lot reading and a lot of videos and stuff like that. We just got our chicks and we’re setting up the hen house. We want to make sure we’re doing it right and don’t have any major mistakes,” Keller says.

Animal specialist Holmes admits sometimes finding out what it takes to be a backyard farmer is enough to curb the enthusiasm. “And I started telling her you need a brooder and a heat lamp and this for feed and this for water and she was instantly “it’s too much I’m out’ and you know- you are going to have people like that. That’s where the education part of these seminars comes in. Because if you get into and lose a whole batch of chicks, it’s frustrating and a lot people will never do it again,” Holmes says.

Iowa had a costly brush with avian flu last spring which killed millions of the state’s chickens. Holmes says now there’s extra attention being placed on bio security. “So making sure that they’re washing their hands and their tools, and not sharing between their farm and their neighbor’s farm,” Holmes explains, “quarantining new birds until they’re proven healthy to integrate with their existing flocks.”

Iowa Agriculture Secretary Bill Northey says while most of the bird flu was confined to large commercial flocks it would be foolish not to be vigilant about what’s going on in our backyard.