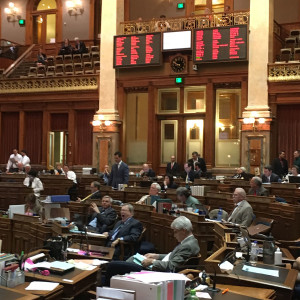 A bid to legalize possession of cannabis oil beyond treatment for chronic epilepsy to cover Iowans who suffer from six other serious medical conditions failed in the Iowa House tonight.

Representative Zach Nunn, a Republican from Bondurant whose mother has cancer, said Iowans will be able buy cannabis oil elsewhere.

“The opportunities in other states that have overstock of this very important cannibidoil, that can help people right now, are readily available,” Nunn said.

But those who want a medical marijuana production and distribution system set up in Iowa joined those who say science hasn’t proven marijuana is a legitimate medical treatment to defeat the plan. Representative Mary Wolfe, a Democrat from Clinton, said the proposal was “absolutely useless.”

“We have no assurances from the state of Minnesota that they will even accept this,” Forbes said. “Sure, there are conversations going on between leaders, maybe, but there are a lot more pieces to the puzzle than just talking.”

“We’re going to ask Iowans to drive to Minnesota,” Kressig said. “Come on, people. We can do better than that.”

“I want Iowans who are sick with certain diseases where cannibidiol would help, I want them to have access to that medicine,” Pritchard said. “In my mind, it’s the right, basic, human, Christian thing to do.”

Representative Steven Holt, a Republican from Denison, voted no for other reasons. Holt said it’s wrong to legislate “based on testimonials.”

“This is a very emotional issue for all of us,” Holt said. “It is gut-wrenching to see children suffering, but feelings are not facts.”

Representative Josh Byrnes, a Republican from Osage, said it will take time to set up a state-sanctioned growing and distribution system here, so Iowans who suffer from chronic conditions would likely be able to get cannabis oil quicker from Minnesota.

Sixty-three House members voted against the proposal and only 31 voted for it. House Democrats say they’ll try to attach their own plan for growing and distributing cannabis oil in Iowa to other bills that come up for debate tomorrow.