You are here: Home / Fires/Accidents/Disasters / State report examines the transport of oil and ethanol in Iowa 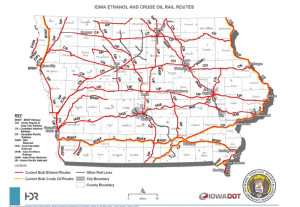 Map shows rail routes of oil and ethanol in the state.

The Iowa Departments of Transportation and Homeland Security and Emergency Management have released a report on the study of the rail transport of oil and biofuels in the state.

The DOT believes it is the first such report nationally that included a look at how the state is prepared to prevent spills, preparedness in the event of a spill, response to an incident, and recovery from an incident.

Susan Dixon of Homeland Security says it brought together information from state, county and local officials along with the railroads.

“I don’t think there are any major gaps out there, but I do think it was a very rewarding experience bringing all the stakeholders together,” Dixon says. “I think the railroads were able to see the view from a local emergency manager and what issues they have to deal with. And then they could see from the railroads’ point of view that they are trying to have resources and be responsive.”

Dixon says her big takeaway from the study was the ability of everyone to work together to try and make things safer. “I think the main thing that really stood out was, I was very impressed with the railroads and their ability and their willingness to work with locals on this. They really wanted to know what they can bring to the table, and be responsive,” Dixon says.

One of the recommendations for preparation is for counties to look at providing money for a full-time emergency management coordinator, or to work together with other counties to have one full-time. “We have very good coverage in emergency management at the local level. That can always be reevaluated and we can have systems in place like we do with our hazardous materials teams that give that technological capability to a greater coverage area in a more economical way,” Dixon says.

She says each of the 99 counties has to determine if the need to put more resources into the emergency management position. “Especially if you have more of a certain product coming through — then a county may want to reevaluate if they need a little bit more coverage. But I am very confident in the coverage we have right now,” Dixon says. Dixon says the state provides a lot of training opportunities for emergency responders, and local providers also do their own training.

She says it’s key that they continue talking and sharing about these issues. “I think it’s very important to build relationships between the stakeholders, between the local emergency managers and the responders as well as the railroads and the state,” Dixon says. “We can provide resources if it comes to a larger incident. But making sure that everybody understand what role and what help they can bring. As we says, Iowa is a state where neighbors help neighbors.”

Iowa produces some four billion gallons of ethanol each year and that is transported in the state, as is some with two-billion gallons of crude oil. A full report of the study is available at: www.iowadot.gov/iowarail.