You are here: Home / News / Another pitch for Iowa-based production of prescription cannabis 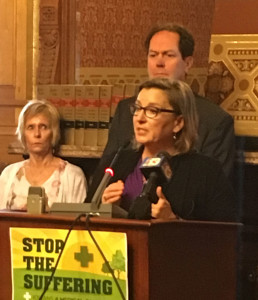 Michelle Richardson of Norwalk has multiple sclerosis and she wants lawmakers to set up a growing and distribution operation here in Iowa for cannabis vapor.

Last night 31 House Republicans unsuccessfully offered a proposal that would have expanded the list of ailments Iowans can possess cannabis oil to treat.

Sally Gaer of West Des Moines has been lobbying legislators to set up an Iowa-based growing and distribution system for the cannabis oil her daughter takes to control her chronic epilepsy.

“I’m disappointed. I feel misled by members of the Iowa House,” Gaer said. “We’ve been working on this for months and what they did last night shows they have no conscience.”

Bob Lewis of Windsor Heights cried as he described the GOP plan.

“I’ve been fighting so hard for this. My illness wasn’t even covered in the bill that was diluted,” Lewis said. “I have lived in pain for 42 years.”

Thirty-six-year-old Laura Jumper and her family are moving from Mason City to Ankeny to be closer to other relatives. She has ulcerative colitis, Graves Disease and a rare form of arthritis that attacks the spine. Jumper wants to take cannabis because prescription drugs are no longer working.

“I used to be a fitness instructor and now I barely can walk and have trouble doing everyday things like showering,” Jumper said, “and just getting in and out of the car.”

House Democrats say they’ll try to force a vote this week, somehow, on a plan to grow and distribute marijuana by prescription in Iowa. Leaders say they’re hoping this is the final week of the 2016 legislative session and a limited number of bills remain eligible for debate.