You are here: Home / Business / Ceremony honors Iowans who died while at work (audio) 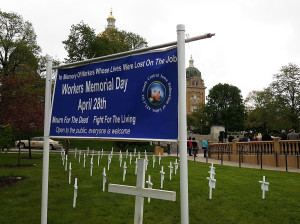 Iowans who died last year while working were recognized today with an event on the grounds of the State Capitol.

The Workers Memorial Day Ceremony is held each year on April 28, the anniversary of the establishment of the Occupational Safety and Health Administration.

Thirty-nine Iowans died in workplace accidents or other on-the-job incidents in 2015. One of the people recognized today was 33-year-old Patrick Webb, who died in a traffic crash in December while working for Sunrise Farms in Osceola County.

His wife Lyndi attended the ceremony with her sons, 9-year-old Jackson and 10-year-old Thomas. “It’s nice to have my husband be honored like this and it’s wonderful for my children to be experiencing this and know that he did make a difference,” Webb said. Thirty-nine-year-old Marlon Hughes was killed in August while working at Cross-Dillon Tire in Des Moines. 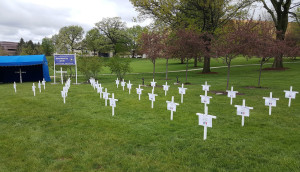 Crosses represent workers who died on the job in Iowa.

His mother, Katherine, said it’s unclear if her son’s death could’ve be prevented. “I think it was just tragic accident,” Katherine said. “He died from blunt force trauma. From what I was told, there were no witnesses, so I don’t know what happened. I do know they said a tire exploded in his chest.”

Another victim remembered at today’s ceremony was 20-year-old Andrea Farrington, who was shot to death in June while working at a kiosk in the Coral Ridge Mall.