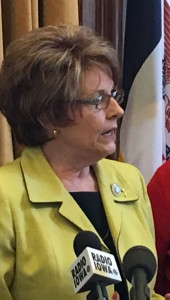 A compromise may be in the works over where Medicaid patients in Iowa can get family planning services after July 1.

Republican House Speaker Linda Upmeyer of Clear Lake is suggesting creation of a new state grant program for other non-profit groups that oppose abortion and provide women’s health services. But Medicaid patients could still choose to use Planned Parenthood.

“At the heart of this matter what we really want to accomplish is make sure women have access, options, choices and so if we can find a way to create more of that opportunity, perhaps that’s an alternative, so we’re having those discussions,” Upmeyer said.

Senate Majority Leader Mike Gronstal, a Democrat from Council Bluffs, told reporters late tonight he did not intend to negotiate with Republicans through the media.

“We’re talking with them in good faith,” Gronstal said.

Senate Democrats have successfully resisted GOP efforts to “defund” Planned Parenthood in each of the past five years. Last month Florida became the 12th state to pass a law that forbids any tax dollars from being spent at organizations that perform abortions.