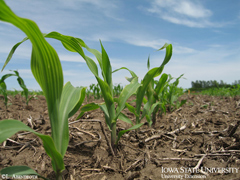 Industry experts say there is a glut of corn on the world market and a new report on planting intentions shows corn acres up more than 5 million from a year ago.

U.S.D.A. grains analyst Jerry Norton says those numbers are higher than anyone expected, though he says farmers in Iowa and elsewhere really can’t afford not to plant those acres in corn.

Norton says one of the reasons corn is so attractive right now is because fuel and fertilizer costs are down, but so are commodities prices.

“Farmers are struggling with low prices right now and these numbers don’t make those prices better,” he says. The International Grains Council predicts world corn production will be up 21-million tons this year while grain supplies remain at record high levels.

Some farmers may have to really cut back this year on expenses, according to Norton. “You’re trying to cover your variable costs but even then, you’re getting to the point of price levels where that’s not going to be easy for everybody either,” he says. “You’re dealing with your machinery costs and trying to keep them consistent with where the price levels are. That means cutting back on machinery purchases because you’re trying to minimize your costs while you’re trying to deal with these lower price structures that we’re looking at worldwide.”