You are here: Home / Sports / The wait begins for Iowa college standouts 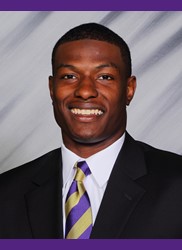 Hall was the Missouri Valley Conference Defensive Player of the Year as a senior and is ranked as the eigth best safety in the draft according to CBSsports.com.

“Deiondre’ is ranked anywhere from the third to fifth round is what I have heard and hopefully he will hit on the second day”, said UNI coach Mark Farley. “If not, he will definitely be on a team and get drafted.”

Hall is one of two Panthers who are projected to be taken in the draft. The other is corner Makinton Dorleant. If both get drafted it would be the second year in a row that UNI had two players selected in the draft.

“What it says about Northern Iowa is that you can be developed and you can become the best at what you do through here. I think the NFL recognizes that a player coming out of UNI has the background and the experience to make it in the NFL.”