You are here: Home / News / Impasse over DOT budget a hurdle to concluding 2016 legislative session 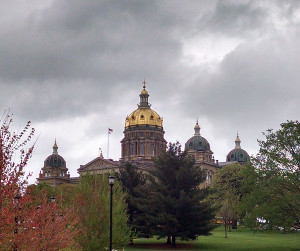 The Iowa DOT’s request for an extra $9.7 million to cover negotiated salary increases is one of the sticking points that remains as lawmakers struggle to conclude the 2016 legislative session.

Republican House Speaker Linda Upmeyer of Clear Lake says House Republicans have asked the DOT to find ways to reconfiguring its own budget, “to accommodate what they need to do, make sure we continue building roads and bridges, because that’s what we promised to do last year.”

The state gas tax was hiked a dime a gallon a year ago to raise more money for DOT construction projects.

“When we told Iowans that we needed to increase the fuel tax so that we could repair bridges, build roads, do the things we needed to do to maintain our infrastructure, that was what we intended to do,” Upmeyer says, “not to do big salary increases.”

Without that extra $9.7 million, Republican Governor Terry Branstad says some of the DOT’s projects could be delayed.

“We need to have the staff to be able to approve the projects so that we can move forward with the road and bridge improvements,” Branstad says. “Frankly, this is something that’s out of our control. This is collective bargaining and an arbitrator’s decision.”

That argument does not sway Upmeyer. She says according to next year’s state budget plan that’s nearly complete, every other state agency will have to adjust a “status quo” budget and find the money to cover salary hikes.