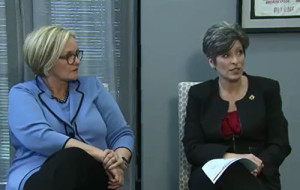 Iowa Senator Joni Ernst, a Republican from Red Oak, joined with Democrat Senator Claire McCaskill of Missouri Thursday to introduce legislation they say will continue the effort to stop sexual assaults in the military.

Ernst, a retired member of the Iowa National Guard, says their bill looks to stop retaliation for those soldiers who report sexual assault.

“What of course we all would like to do is eliminate sexual assaults period in our armed forces,” Ernst says. “So there is always an effort ongoing at the front end. But if we cannot prevent it, what we need to do is make sure our victims are protected.”

Ernst and McCaskill say the Military Retaliation Prevention Act will strengthen the military response, increase transparency, require specific training for investigators and ensure each of the services adopt best practices to prevent and respond to instances of retaliation. McCaskill says the legislation also takes another important step to see that any retaliation is punished.

“What we are doing here is we are making it its own crime — professional retaliation — it is now going to be a unique offense,” McCaskill says. Ernst was asked how this bill will change things. “I think it starts as a cultural issue, but at some point then it does it does become a legal issue when you have specific instances of retaliation,” Ernst says. “So first one way that we have to combat this is really starting with what is our military culture. What is acceptable and what is not acceptable. And in no way shape or form is sexual harassment, sexual assault okay.”

She says leaders in the military will play a key role in creating a culture that helps prevent sexual assault and retaliation. “Anybody in the chain of leadership should be setting that example for young soldiers and making sure they are fostering that climate of dignity and respect,” Ernst says. “And I keep saying that over and over again because that is so important when we have so many young men and women entering today’s military that simply have lived in in different types of circumstances.”

Ernst believes there is support for the bill. “I’m not receiving any push back from any commands or anyone that I have been associated with in the military. I think it is a smart piece of legislation, it is what we should be doing,” Ernst says. The two say there have been more than 30 reforms already passed into law over the past few years dealing with the issue.