You are here: Home / Sports / U.S. hurdlers focused on Oregon and not Rio 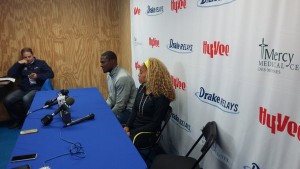 United States hurdlers David Oliver and Queen Harrison don’t view this season as an Olympic year. They are most concerned with July’s Olympic Trials in Eugene, Oregon.

Oliver and Harrison will take part in tonight’s COED shuttle hurdle relay at the Drake Relays as well as their individual 110 and 100 meter events on Saturday.

“We run July eighth and ninth and that is the two days I have marked on my calender”, said Oliver. “Thise are the most important dates right now and it has nothing to do with Rio, Brazil.”

Harrison is a contender after winning gold at the Pan American Games last year and says her only goal right now is to make the U-S team.

“I am not a look into the future type of person and I like to focus on the here and now”, said Harrison. “I know a lot of people are focused on the road to Rio but there is a major step you need to take before you can board a plane to Rio and that is the Olympic Trials.”