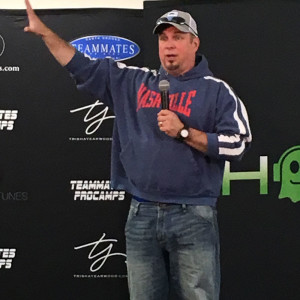 Garth Brooks talks with the media before Friday’s concerts

Ames, Iowa, was the destination for the first trip Garth Brooks took outside of his home state of Oklahoma.

The country music super star is back in Iowa this weekend, headlining a string of six concerts in Des Moines.

“I can tell you this: Gratefulness is probably the big word on this tour,” Brooks said as he and his wife, Trisha Yearwood, spoke with a small group of Iowa reporters Friday afternoon in Des Moines. 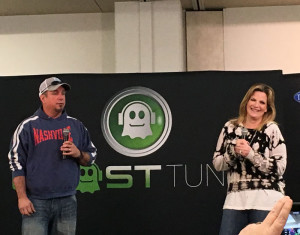 Friday night, Brooks and Yearwood played not one but two sold-out shows at Wells Fargo Arena to more than 30,000 people.

“Funny how things come full circle,” Brooks told reporters. “The first time I was ever out of the state of Oklahoma, it was in Iowa. Had the Big 8 championships in Ames,”

Brooks threw the javelin for Oklahoma State — and he participated in the Drake Relays.

“This was like one of the pinnacles, so as a college kid you can imagine more important than a medal was to make sure you got your Drake Relays t-shirt,” Brooks said.

Brooks released his first album in 1989. According to the Recording Industry Assocation of America, no other solo artist has sold more records or “units” in the United States. Brooks retired from performing in 2000.

“Sixteen years. Never missed a practice. Never missed a game. Greatest time of my life, man,” Brooks said, his voice cracking during the news conference. “It was fabulous.” 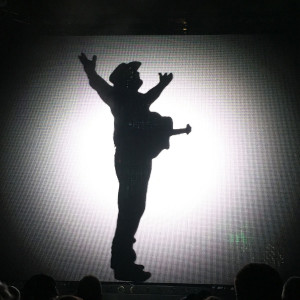 Garth Brooks’ silhouette on a big screen got the crowd roaring in anticipation.

Brooks is now back on the road with a supporting band of musicians who’ve been with him for decades.

“These guys are lifers,” Brooks said of his band. “…Touring at this level this late in our career, we feel very lucky.”

During an interview with Radio Iowa, Brooks talked about the lyrics to one of his biggest hits — The River.

“When you say: ‘Choose to chance the rapids, dare to dance the tides’ — if the sun comes up and you get to see it, go to work,” Brooks said.

Brooks graduated from Oklahoma State with a degree in advertising and he reminisced about the message a professor delivered on the first day of journalism class. 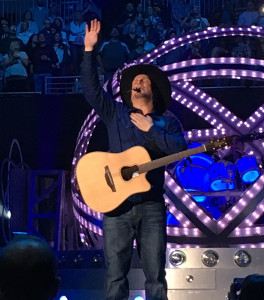 Garth on stage in Des Moines.

“He comes in, doesn’t say a word. He looks like he’s 200 years old and he looks like he’s as wise as he can be, takes the chalk, goes over the blackboard and says: ‘You have the power to ruin people’s lives. Be careful with it,'” Brooks said, adding his own word “Boom” to describe the moment.

“And that’s how he started the semester. It was bad ass. It was one of my favorite classes ’cause he hit it right on the head. Journalism has an extreme responsibility with it and, no offense, but I hope that everyone that is in journalism wakes up every day and realizes that responsibility.” 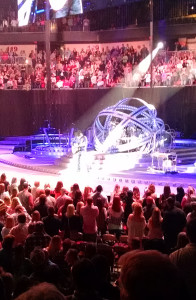 Audience members sang along to most of Brooks’ songs.

Brooks told the crowd at his first concert in Des Moines that when he goes to a concert, he wants “to hear the old stuff.”

He and Yearwood spun a 27-song set that had the crowd singing along with well-known hits like “Friends in Low Place” and a lesser-known song called “Ireland”. A girl in the audience named Ireland had been holding a poster asking Brooks to sing the song, which was featured on his sixth album but never released as a single.

A third of the way through the concert Brooks declared that he loved his life after leading a cheering contest among sections of the arena.

About mid-way through the concert, Yearwood’s voice rang through the hall before an elevator lifted her on stage. Yearwood told the crowd she had been listening to the crowd roar and sing along with her husband “through the 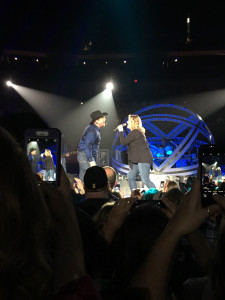 Brooks and Yearwood sing a duet.

concrete” backstage. Scenes from Yearwood’s show on “The Food Network” played on the arena’s video screen as she sang her opener.

Yearwood talked about her new career as a cookbook author and food show host during an interview with Radio Iowa Friday afternoon.

“Music, you can hear a song and it takes you back to a time in your life that you remember in a good or bad way and food is the same way. My mom and my dad were really good cooks and they’re both gone now. My sister and I talk a lot about when we make the Thanksgiving meal and make my mom’s cornbread dressing, which was her mom’s cornbread dressing or my mom’s potato salad. It’s a memory and it’s important.”