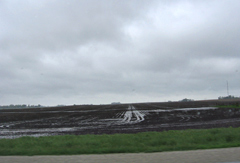 Some areas of the state got heavy rains in the month of April.

April was a month of weather extremes in the state, from snow and frigid temperatures in the teens to warm, sunny days in the mid-80s.

“The statewide average was about 3.15 inches or so, about a third of an inch less than usual for the month of April,” Hillaker says. “Again, there was a lot of variability across the state with the precipitation amounts.”

Western Iowa had the heaviest rainfall and ended up above-normal for the month, while parts of eastern and northeastern Iowa were below normal for precip.

While April is often a turbulent weather month, there was only severe weather on two days. April 24th brought high winds and hail to parts of northwest and southwest Iowa, while April 27th saw multiple twisters. “The National Weather Service reported four confirmed tornadoes in southwest Iowa that afternoon,” he says. “Fortunately, none of them were all that big and there wasn’t a lot of damage. Overall, that’s pretty quiet for April to have only two dates with severe weather in the month.”

For the month ahead, the long-range forecast calls for slightly warmer-than-normal temperatures and somewhat drier conditions. Hillaker says that’s typical for springs where the El Nino weather pattern is dominant.