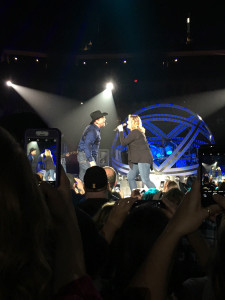 Brooks played an acoustic version of a George Strait classic, Amarillo By Morning, on Friday night. During an interview with Radio Iowa before the concert, Brooks was asked which hits by other artists he’s most like to “cover”.

Brooks would like to do some Journey songs, recorded when Steve Perry was the band’s lead singer.

“When you think about that kind of music, growing up as a kid and knowing that if I had the pipes like that, I would sing those songs,” Brooks said.

Brooks released his own “Man Against Machine” in 2014, but most of the songs he’s singing on this tour are the top hits from his nearly 30-year career.

During The Garth Brooks World Tour, Yearwood joins her husband on stage and sings a handful of her hits solo. She’s recently gained acclaim for her cover of “Broken”. She performed it during the live Palm Sunday broadcast of “The Passion: New Orleans” on FOX.

“I know that Lifehouse, their original recording I think was written about a friend of his who was ill and it was a very personal song about his best friend,” Yearwood said. “For me, I can’t sing it and not take it to a higher power. Maybe because of that’s how we did it in the show…but when I sing that song, it’s about how you’re broke and God’s got you. That’s what this is about.”

There is one more show in Des Moines tomorrow night before The Garth Brooks World Tour with Trisha Yearwood moves on to Fargo, North Dakota.