You are here: Home / Sports / Iowa and Michigan headed for prime time 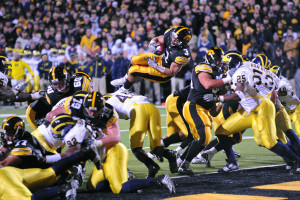 When Iowa and Michigan collide on the football field for the first time since 2013 they will do so under the lights. The November 12th game at Kinnick Stadium will kick in prime time and be carried by ABC or one of the ESPN networks.

“Our two prime time games in Kinnick Stadium last season proved to be outstanding games and were very well received by our fans,” said Iowa athletic director Gary Barta. “Most importantly, we came away with two important wins. The electricity surrounding the home field advantage was definitely a factor.

The home contest against Michigan is Iowa’s Blackout game for the 2016 season, similar to the night game a year ago against Minnesota. Fans will be encouraged to wear black clothing to the game. The Michigan contest will also be Iowa’s recognition of Veteran’s Day/Military Appreciation Game.