You are here: Home / Sports / Iowa splits with Kansas State 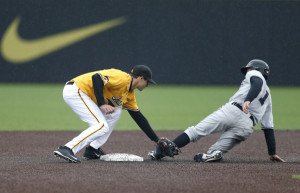 Sophomore Nick Gallagher pitched seven shutout innings in relief to lead the Iowa Hawkeye baseball team to a 2-1 victory over Kansas State in the opening game of a Sunday doubleheader at Duane Banks Field.

The Wildcats rebounded with a 4-2 victory in the nightcap as they claimed two of three games of a soggy weekend series. Iowa is now 20-21 on the season and will host Western Illinois on Tuesday night in non-conference action.