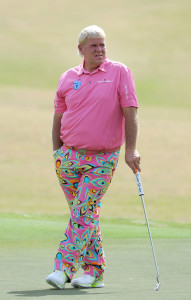 The newest member of PGA Tour Champions says he is just happy he made it to the age of 50.

John Daly has been a crowd favorite since he shocked the golf world in 1991 by winning the PGA Championship after driving to the tournament as an alternate. He added a British Open title in 1995.

Daly will play the Principal Charity Classic in Des Moines next month and says the Tour Champions has given a new start to a career that has featured more off the course troubles than wins.

“Just to be able to have a home to play again”, said Daly. “It has been pretty tough the last few years not knowing where I am going to play and waiting by the phone for sponsor exemptions. Now that I have a category I can play and get a schedule going it is going to be good for me.”

Daly will debut on the senior circuit this week at the Insperity Invitational in Houston, Texas and has committed to play in the next five events.

Through all of his difficulties Daly has remained a popular figure and always draws a lot of fans wherever he plays.

“They pump me up and I feed off them. They really fire me up and having them on my side is a pretty cool thing.”

The Principal Charity Classic in June 3-5 at the Wakonda Club in Des Moines.