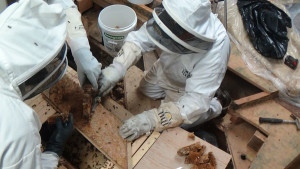 Beekeepers took thousands of bees out of the church rafters.

A rural church in northwest Iowa’s Plymouth County has been buzzing with activity after a large bee hive was discovered inside the sanctuary.

James Strickland, a beekeeper and pastor of the Nazarene Church in Le Mars, offered to help the nearby Addaville Methodist Church to remove the hive.

“We did a little poking around and we discovered the bee hive was in the choir loft between two floor joists,” Pastor Strickland says. “We didn’t know at that point exactly how large it was but when we opened it up to remove the hive, it measured about eight-and-a-half feet in length, 17 inches wide and 11 inches deep.”

Strickland and two other beekeepers removed the active hive, which took the better part of a day to extract the bees, the hive, the comb and honey. “That hive had been there for several years,” he says. “We pulled six five-gallon buckets full of honeycomb off of that hive which is unheard of for this time of year. The bees should have eaten through most of their honey having gone through the winter and not being able to bring in any food of their own.”

Strickland and the other beekeepers were wearing full protective gear as they removed the floorboards in the choir loft. “We discovered this massive hive, teaming with bees, absolutely full,” he says. “It’s hard to estimate bees because they won’t stand still. We estimate somewhere around 50,000 bees.”

There are discussions about marketing the honey from the church hive as “Holy Honey.”