You are here: Home / News / ‘I don’t know how we heal up,’ King says after pitched primary battle 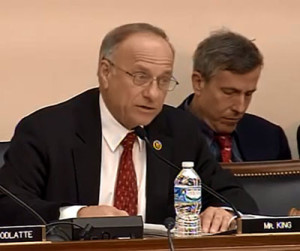 Iowa Congressman Steve King said it may be difficult for the GOP to unite behind Donald Trump.

“I don’t know how we heal up from this,” King said. “…It’s going to be, to a degree, a divided party that’s going to have to look across at the other side…If Hillary Clinton is the nominee, that might be what brings us together.”

Cruz suspended his campaign last night after losing to Trump by double-digits in Indiana’s Primary. In mid-February, King warned Democrats will spend “hundreds of millions of dollars” replaying all the things Trump has said during this campaign — and it will hurt all Republican candidates.

King has said Trump has lied about Cruz on several fronts, including this week’s accusations about Cruz’s father. King traces Trump’s widespread support to dissatisfaction with the GOP establishment.

“People are fed up with government,” King said. “They’re frustrated that Republicans have not stood up and taken on this president.”

King now has the backing of both U.S. Senators and the state’s ag secretary. Governor Terry Branstad has said he’ll stay neutral in the race. Branstad and King had a very public falling out this January over Cruz’s stand on ethanol.