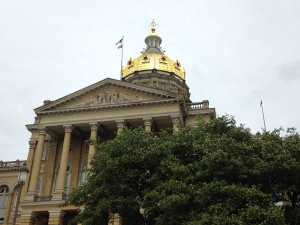 The top two leaders in the legislature reject the idea the “anti-establishment” fervor among the nation’s voters this year will trickle down and doom incumbents like them running for reelection to the Iowa House and Senate.

“I think there’s certainly a level of voters that are angry in general,” Gronstal said today.

Upmeyer added: “I think the senator’s right that there’s a certain level of anger or frustration all around, but I know this: nothing unites Republicans like Hillary.”

Gronstal laughed. “I think on that front we’re equal. There are certainly Democrats that react to Trump.”

Upmeyer said having Donald Trump as the GOP’s presumptive nominee presents a “great opportunity” for Republican candidates at the state level.

“Donald Trump has got rather unconventional supporters in some areas and in fact people who may not have voted with great regularity, so I think this is a wonderful opportunity for us to reach out to even more Iowans who may be interested in what we’re doing,” said Upmeyer, who has pledged to support the GOP’s nominee for president.

Gronstal endorsed Hillary Clinton the day before the Iowa Caucuses. He predicted most new voters energized by Bernie Sanders will stick with the Democratic Party.

“Every Caucus season there are winners and losers during the Caucus and some of their supporter stay out of politics, but in most cases those folks then participate in the fall campaigns…and help turn-out the vote for whoever the nominee is,” Gronstal said.

The two legislative leaders made their comments today during taping of the “Iowa Press” program that will air Friday night on Iowa Public Television.