You are here: Home / Fires/Accidents/Disasters / Fires cause more damage in Iowa than natural disasters 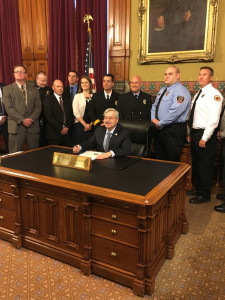 This is “Arson Awareness Week” in Iowa.

“There’s very rarely a week that goes by that we don’t have an arson fire somewhere results in a lot of property damage,” says John Ticer, a special agent in the Iowa Fire Marshal’s Office.”Fires actually cause more damage in any given year than all the other natural disasters combined and arson represents a significant amount of that.”

Last year, 36 percent of the fires Ticer and the rest of the staff in the Iowa Fire Marshal’s Office investigated were determined to be intentionally set. One of the goals for “Arson Awareness Week” is to encourage the public to report specific activity.

“A significant number of our fires, when we solve them, are actually attributed to the public’s help that we get, just like any other crime, but our crime is more difficult than others to prove,” Ticer says. “Unlike a lot of other crimes where you’re got a knife or a gunshot wound that’s manifested right away, oftentimes the crime of arson isn’t noted until sometimes hours, days or weeks later.”

The Iowa Fire Marshal’s Office is hoping to get the public’s help in solving some “cold” cases.

“A lot of our evidence gets destroyed in the process of the fire, so it makes our cases much more difficult sometimes,” Ticer says, “and so when the public comes forward and helps on these cases, it just makes our job that much easier — and easier to prove in court.”

Arson fires caused an estimated $2.5 million worth of property damage in Iowa last year. Ticer says some of that is insurance fraud, but there are a variety of other causes for arson fires, including revenge.

“Those are actually our most deadly fires,” Ticer says. “We’ve investigated a number of fires over in southwest Iowa over the years that have involved fatalities that are caused by the spite/revenge fires…We always have fires that are the result of bad drug deals or people who are high on an illegal narcotic at any given time who may not be thinking clearly and then, yes, we do every year have fires that are related to people who just simply like fires.”

State officials like Ticer urge parents of children who seem to have a compulsion to set fires to get those kids into treatment, so they don’t turn into pyromaniacs as adults.

“As adolescents, their fires will be relatively small,” Ticer says. “When they move into their adulthood, those fires will continue to get bigger and bigger and eventually affect whole communities through the setting of actual buildings on fire.”

State and local authorities say a kid with a cigarette lighter set the fire that destroyed a sale barn in Stuart last month.