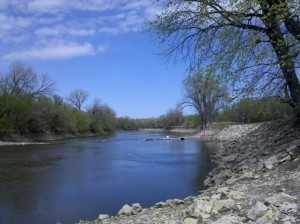 The Iowa legislature adjourned this year’s session without taking much action on improving the state’s water quality. Now, an Iowa City based research organization has released a report suggesting the state follow changes made in Ohio.

“First of all, the limits. For some reason, we set our limit at 500 animal units, which is very, very large,” Osterberg said. “Ohio has recognized, as most states have, that you need to go down to facilities much smaller than that.” Ohio’s limit is 300 animal units. Senator Joe Bolkcom, a Democrat from Iowa City, introduced a bill this year that would have copied Ohio’s regulations here in Iowa, but it was never brought up for consideration.

Osterberg is hoping this IPP research will reach all Iowa legislators before next year’s session. “We do a study like this, we find out what the evidence is out there — in this case, from other states — and ask the question ‘why can’t we do that in Iowa?’ Hopefully, we’ll move towards a discussion, so if Senator Bolkcom files his bill again, it will get a hearing,” Osterberg told reporters Wednesday in a conference call.

You can check out the full report at iowapolicyproject.org.