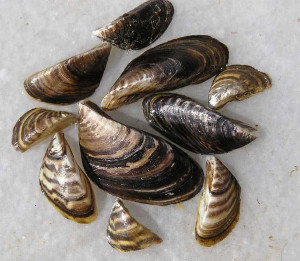 “It’s concerning that we found them in there,” Bogenschutz says. “It indicates to us that zebra mussels were introduced in the lake. What we don’t know yet is if those veligers took hold and if they are reproducing adults in the lake.” The agency also confirms several zebra mussels were recently found in Blue Pit in Mason City. Bogenschutz says they’ll continue to monitor both bodies of water.

“We’ll take water samples every month, again, looking for the veligers and we have to look at those samples under the microscope because the veligers are so small that you can’t see them,” she says. “We’ll also be going out there in June and again in August and picking up hard structures, because that’s what zebra mussels attach to.”

Zebra mussels look like small, D-shaped clams that have alternating light and dark bands. Most are less than one inch long. They can form dense clusters and in the case of large infestations, they may interfere with aquatic food chains, kill native mussels, clog water intakes, increase algae blooms and cover beaches with dead shells. Known populations within Iowa include Clear Lake, Bluebill Lake, the Okoboji chain of lakes and the Mississippi River.

Bogenschutz urges boaters to thoroughly clean any plants, animals or mud from their boats and equipment before leaving a water body, drain all water and dry anything that came into contact with the water.