You are here: Home / Education / Gambling exec, who’s also a doctor, appointed to Board of Regents 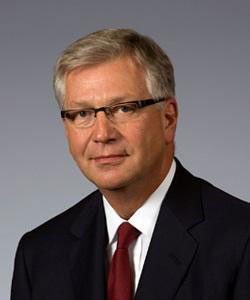 Mary Andringa, the chair of the board for Vermeer Corporation in Pella, resigned from the Board of Regents April 27. Vermeer started her six-year term on the board a year ago, but said she underestimated the time committment and had to resign to meet her other responsibilities.

The governor has appointed 68-year-old Mike Richards of West Des Moines to serve out the remaining five years of Andringa’s term. Richards is a medical doctor who once served as the chief medical officer for the Iowa Health System. It’s now called UnityPoint.

Richards also has extensive business experience. He’s listed as vice chairman of the Wild Rose Casinos in Emmetsburg, Clinton and Jefferson on the company’s website. In addition, Richards is currently managing partner of Quatro Composites, a manufacturing company based in Orange City.

Richards is a graduate of the University of Iowa School of Medicine and he earned an undergraduate degree from Iowa as well. His appointment to the Board of Regents must be confirmed next year by the Iowa Senate.