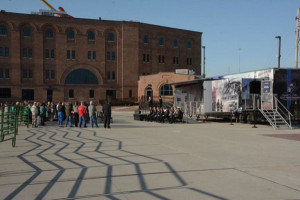 The 9/11 Never Forget Mobile Exhibit is in Sioux City.

An exhibit highlighting the heroism and tragedy of the September 11th attacks on America has opened at Sioux City’s Hard Rock Hotel and Casino.

The 9/11 Never Forget Mobile Exhibit is on display at Battery Park now through next Wednesday. It’s presented by the Stephen Siller Tunnel to Towers Foundation, named for a New York firefighter who gave his life on 9/11 responding to the World Trade Center attacks.

Lisa Reese is the coordinator for the traveling exhibit, and says Siller had just ended his shift and was headed to play golf with his brothers, when he heard of the planes striking the Twin Towers.

“Without a thought for his safety, he turned himself around, went back to his fire house, picked up his gear and got as far as the Brooklyn Battery Tunnel which was closed already,” Reese says, “put on 65 pounds of gear, ran through that tunnel over two-and-a-half miles to the south tower. Reunited with Squad One where he later perished, but not before he and his squad saved a lot of people that day.”

Four retired New York City firefighters that were there that day will guide the tours at the exhibit and speak of their own experiences on that fateful day. Reese says we should recall how the emergency responders lived and performed in the face of danger during the events of 9-11. “The exhibit is not so much about the sadness so much of that day as it is of the heroism of that day,” Reese says. “We want to be sure that everybody remembers those first responders — who without and second thoughts — ran straight into those towers to help save people.”

The 1,100 square foot exhibit includes steel beams from the towers, videos, and recordings of first-responder radio transmissions. The 9/11 exhibit is free of charge and will be open to the public weekdays from 2:30 p.m. to 9 p.m., and on the weekend Saturday from 10 A.M. to 9 p.m. and Sunday at 9 A.M. Morning weekday hours are reserved for school children tours.