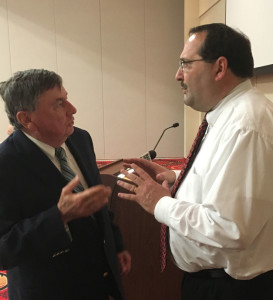 The Iowa Democratic Party formally launched its review of the 2016 Caucuses today with a public meeting in Des Moines and plans to release a report in September with recommendations for how the 2020 Caucuses should be conducted.

Iowa Democratic Party chairwoman Andy McGuire appointed the review panel. She opened the meeting with these words: “There is no suggestion that is off the table.”

Hillary Clinton finished a quarter-of-a-percentage point ahead of Bernie Sanders in the Iowa Caucuses. The Sanders campaign complained there was no way to conduct a recount, plus there were concerns about confusing party rules, tiny venues and long lines for Democrats who turned out February 1.

“We represent the one place where you can start unknown and rise to national prominence and if not win a nomination, at least deliver a message that the rest of the country hears,” former Iowa Congressman Dave Nagle of Waterloo said this morning.

He served as chairman of the Iowa Democratic Party in the early 1980s and Nagle is leading the 26-member review panel. Nagle invited Iowa GOP chairman Jeff Kaufmann to speak to the group.

“We all know that we sink or swim together on Iowa First in the Nation. It’s that simple,” Kaufmann said to open his remarks. “…This is important to all of us.”

Kaufmann revealed the Iowa Republican Party spent nearly a million dollars putting on its 2016 Iowa Caucuses. Four paid staffers were hired to work full-time on the project in the year leading up to the caucuses. More than 300 training sessions were held around the state for the party volunteers who ran the Republican Party’s precinct meetings on Caucus night.

“If I could boil down to what was absolutely crucial for us, it’s that constant, non-stop training,” Kaufmann advised.

Four years ago David Oman led the Iowa GOP’s committee that reviewed the conduct of the 2012 GOP Caucuses and recommended changes for future Republican Caucuses.

“It’s worth preserving, improving, sustaining and securing for as far as the eye can see,” Oman said to conclude his remarks to the Democrats’ Caucus Review committee.

Richard Bender devised the system Iowa Democrats use for their caucuses. There is no straw poll to determine the winner, like there is when Iowa Republicans Caucus. Instead, Democrats in each precinct use a mathematical formula to calculate “delegate equivalents” for each presidential candidate who clears a 15 percent threshold of support in a precinct.

“I don’t think we want to change the fabric of what caucuses are,” Bender said. “We really don’t want what’s known as ‘firehouse caucuses’ where people just go and cast a vote and leave.”

According to Nagle, New Hampshire officials would consider the Iowa Caucuses too much like New Hampshire’s first-in-the-nation primary if Democrats were to hold a straw poll Caucus night.

“The Caucuses are also supposed to be a party-building exercise, not a drop-and-go,” Nagle said. “We’re going to look at it. It’s not off the table, but it’s got some obstacles to overcome before we’d actually move in that direction.”

Iowa Republicans first held a statewide Caucus Night “straw poll” in 1980. Nagle said the Iowa GOP’s straw poll along with the Democrats’ system of delegate selection were allowed in a 1982 deal with New Hampshire. It allows Iowa to hold the nation’s first caucuses and New Hampshire the first primary in presidential election years.

Some recommendations discussed today included electronic check-in for future caucus-goers and a new state law that would require government facilities to be available for the precinct meetings held on Caucus Night.