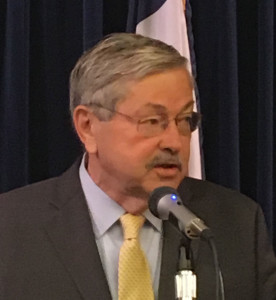 Governor Terry Branstad wants to meet with Donald Trump, so he can offer this advice: choose Iowa Senator Joni Ernst as your running mate.

“He said he’s interested in somebody with military experience, but then he thought having congressional experience would also maybe be more important. Well, she’s got both,” Branstad says of Ernst. “And she comes from a key state and she also in 2014 came out of nowhere to win a very decisive victory to the senate.”

Ernst, who is 45 years old, was a career member of the Iowa National Guard, rising to the rank of lieutenant colonel. She retired from the Guard last year. Branstad describes Ernst as a “team player” and he points out she had six years of experience as a county official and served nearly four years in the state senate.

“An ideal profile of somebody that would be a great vice presidential candidate and I think she’d be helpful to Republicans in Iowa as well,” Branstad says. “…When I get an opportunity to visit with Donald Trump, I’ll certainly indicate that we have a senator from Iowa that could be a great asset to the country and to him.”

A spokeswoman for Ernst says Ernst is focused “on serving Iowans” and collecting the concerns and ideas of Iowans firsthand and “turn that feedback into action in Washington.” Lieutenant Governor Kim Reynolds encouraged Ernst to run for the state senate and then the U.S. Senate. Reynolds says she hasn’t talked with Ernst about the prospect of being Trump’s running mate.

“I have a great deal of confidence in Joni and she needs to be the one that makes that decision,” Reynolds says.

Branstad has called New Jersey Governor Chris Christie, who has endorsed Trump, to lobby for a personal meeting with the presumptive Republican nominee. Branstad in 2015 predicted that Trump would not be the GOP’s presidential nominee.

“When he came to the Iowa State Fair and flew his helicopter around and stuff I thought: ‘This is not going to last,'” Branstad says. “Well, I was wrong.”

According to Branstad, Americans “want something different” and in this “unusual and unconventional” election year Trump shouldn’t be underestimated.

“He’s going to be the nominee of our party and I’m a team player and I’m going to support him,” Branstad says.

There are Republicans who say they will never vote for Trump. Branstad says it’s time for the GOP to unite and line up behind a candidate who is the “epitome of non-politically correct.”

“A lot of people love that because they say, ‘Well, that’s exactly what I’m thinking, but I wouldn’t dare say it,’ and he’s dared say things,” Branstad says, laughing. “Now, do I agree with everything he’s said? Oh, by no means…but the bottom line is still the American people need to choose a direction for this country. Do we want to continue the direction we’re going and choose the ultimate insider, which is Hillary Clinton, or do we want somebody that is going to shake things up, that might be unpredictable?”

Branstad made his comments about Trump during his weekly news conference.