You are here: Home / Fires/Accidents/Disasters / Canadian smoke moves out after creating haze in Iowa 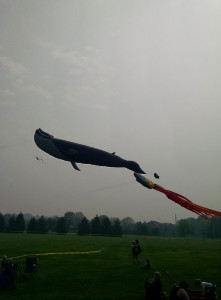 A large kite flies in hazy skies in Johnston Saturday.

The plume of smoke that blew into Iowa this weekend from the Canadian wildfires has cleared the state and the air quality is back to normal.

The DNR’s Air Quality Bureau issued an “air quality advisory” Saturday. Spokesman John Gering says the atmospheric conditions not only combined to hold the fine particles of smoke over the state — but also pushed the particles lower to the ground, causing a foggy type haze.

“It does look similar to fog — it’s actually very similar in appearance to fog — and it might take some expertise to be able to tell the difference on a purely visual basis,” Gering. He says the amount of haze seen here doesn’t happen that often. “We did have something similar to this occur last summer. I suppose as long as the fires continue to burn and if the weather conditions are right, it could happen again,” according to Gering.

The U.S. EPA says its a problem when the particles in the air reach 35 micrograms per cubic meter. Gering says many areas went over that Saturday, as Waterloo had a reading of 37.2, Cedar Rapids 37.6, Viking Lake 40, Des Moines, 50.7 and Emmettsburg was at 61. He says that air quality can be a problem for some people.

“As a matter of fact, in our air quality advisory we advised that folks with respiratory or heart disease, and the elderly and children, should limit prolonged outdoor exertion until the smoke plume had passed,” Gering says. A check of the air quality monitors shows the Canadian smoke has passed out of the state.

“All the air quality is in the good to moderate category and we don’t have any health advisories for any part of Iowa that are active or issued for today,” Gering explains. Several areas of the state got rain this morning, and Gering says that can help clear the air. “Yeah, it would certainly help some,” Gering says, “in addition to that, often times behind the rain there is a front of cleaner air moving into the location as well.”

You can track air quality conditions in the state on the DNR’s website at: www.iowadnr.gov/Environmental-Protection/Air-Quality/Air-Quality-Index-AQI.