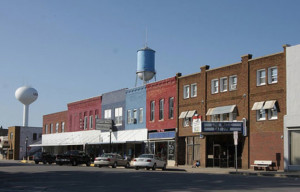 A town in southern Iowa is one of just five small communities across the country to land help from the federal government on economic development initiatives.

“Ultimately, the EPA is partnering with myself and a steering committee of Leon residents to put together a plan to utilize broadband to revitalize our downtown square,” Pitt said. The selection of Leon and the small towns in four other states was revealed last week by the U.S. Department of Agriculture and the U.S. Environmental Protection Agency. The plan for Leon involves a free wifi zone in its downtown square.

Pitt believes it’ll benefit both local residents and businesses. “Just the idea and concept that there is wifi available downtown will hopefully bring in more foot traffic to the area,” Pitt said. Leon has a population of roughly 1,800 residents.

“You know, we might be small, we might be rural, we might have economic stress, but we can be just as innovative as anyone else,” Pitt said. “That’s really the underlying message.” EPA officials are scheduled to visit Leon in early August, just days after the Decatur County community plays host to an overnight stop of RAGBRAI on July 26.

Photo courtesy of the Leon Chamber of Commerce Facebook page.