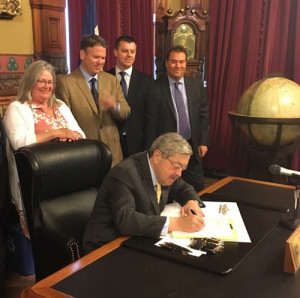 The governor has signed a bill into law that sets up new statewide standards for internet-based ride-sharing services like Uber and Lyft.

The new law requires background checks for drivers, to screen out those with criminal records or red flags in their driving records.

Senator Tod Bowman, a Democrat from Maquoketa, says the legislation is a compromise after two years of behind-the-scenes work.

“It protects drivers, passengers, the public and other businesses,” Bowman says.

The new law gives state officials new authority to oversee Uber, Lyft and other “transportation network companies” that let a passenger use an app on their smartphone to arrange a pick-up and pay for the ride. It lays out how much insurance the driver or the company needs to carry, plus sets some standards for vehicle safety. Uber currently operates in Des Moines, Ames, Cedar Rapids and the Quad Cities.

“For those of you that haven’t had a chance to be in a location that has Uber, it is a safe, reliable, practical and affordable alternative,” says Representative Vicki Lensing, a Democrat from Iowa City.

Iowa is now one of 32 states with laws governing how Uber and Lyft may operate. The ride-sharing companies today suspended service in Austin, Texas. On Saturday, Austin voters refused to get rid of a local ordinance requiring their drivers be fingerprinted.