You are here: Home / News / Some areas of the state could see severe weather 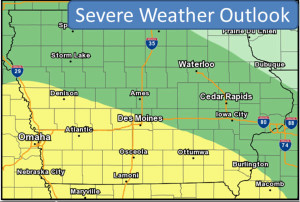 This NWS map shows southern Iowa is most likely to have severe weather.

“There is a slight risk for severe weather across mainly the southwestern and southern portion of the state, mainly from Interstate 80 southward,” Beerends says. “Mainly large hail or damaging winds could be with the storms late this afternoon into this evening.”

Three tornadoes were reported on Sunday in central Nebraska. She says Iowa may be in for more foul weather over the next few days.

“We’ll continue to see chances for showers and thunderstorms on Tuesday and again Wednesday,” Beerends says, “and then Wednesday, we do have another slight risk for severe weather and severe thunderstorms, mainly again across the southern half of the state.” The forecast calls for dry weather on Thursday and Friday, though there’s a chance of showers on Friday night.