You are here: Home / Sports / Wartburg is top seed in IIAC baseball tourney 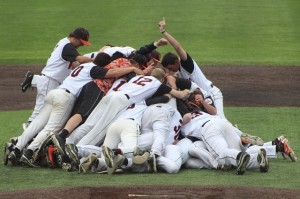 Photo from Elwin Huffman at KOEL

Regular season champion Wartburg will be the top seed at this week’s Iowa Conference baseball tournament in Cedar Rapids.

The Knights won or swept every four-game conference series this season in posting a 23-4 record.

“It’s hard to sweep four games against anybody and our guys have really done a good job all season of being prepared for each series and battling through it”, said Wartburg coach Joel Holst. “Give credit to all of our guys for doing that.”

The Knights have been winning with pitching and defense. Opponents batted only .249 and Wartburg made the fewest errors in winning a third conference title in four years.

The winner of the Iowa Conference Tournament gets an automatic bid into the NCAA Division III Tournament. At 31-9, the Knights would have a chance to earn an at-large bid even if they don’t win the tournament.

“We’ve had a good season but I think it is critical that we win a couple of games in the conference tournament. With 31 wins and a couple of wins in the tournament I would feel comfortable but you just never know.”