You are here: Home / Fires/Accidents/Disasters / DNR investigating how wrong chemical got into Anamosa water supply 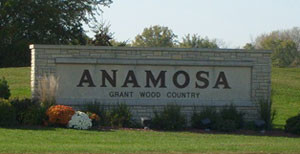 The Department of Natural Resources is investigating to try and determine how the wrong chemical got into the water supply of Anamosa in eastern Iowa.

“The city uses magnesium sulfate to treat the water for radium levels. When the distributor was filling the tank he noticed it looked a little different than it normally does,” Baskins explains, “and so the city ended up turning the pump off. The automated system ended up kicking the pump on over the weekend and approximately three gallons of the chemical was injected into the city’s water supply.”

He says Viking Chemical of Rockford, Illinois supplied the material and sent a toxicologist to try and identify it. “It was a chemical commonly used in cosmetics and it was deemed to not to be harmful to the water supply in the amount that it got in,” Baskins says. The chemical — triethanolamine — mixed into the 750,000 gallon water supply and the city’s 5,000 residents were advised to drink bottled water until Monday evening when the chemical was identified.

Baskins says the city also took steps to be sure the water was safe. He says the city flushed the system throughout and residents should have fresh water now. Baskins says it appears the wrong chemical was put in the container used by the water plant. “We’re still trying to investigate how this happened — but it looked like it was mislabeled at the distribution plant,” Baskins says.

He says they are also investigating to see if the right steps were taken after the material was discovered. “We’re trying to determine what protocols were used, and what enforcement actions if any might be appropriate for this,” Baskins says. The city contracts with Water Solutions Unlimited to take care of the water supply. An employee from that company first discovered the mixup in chemicals.